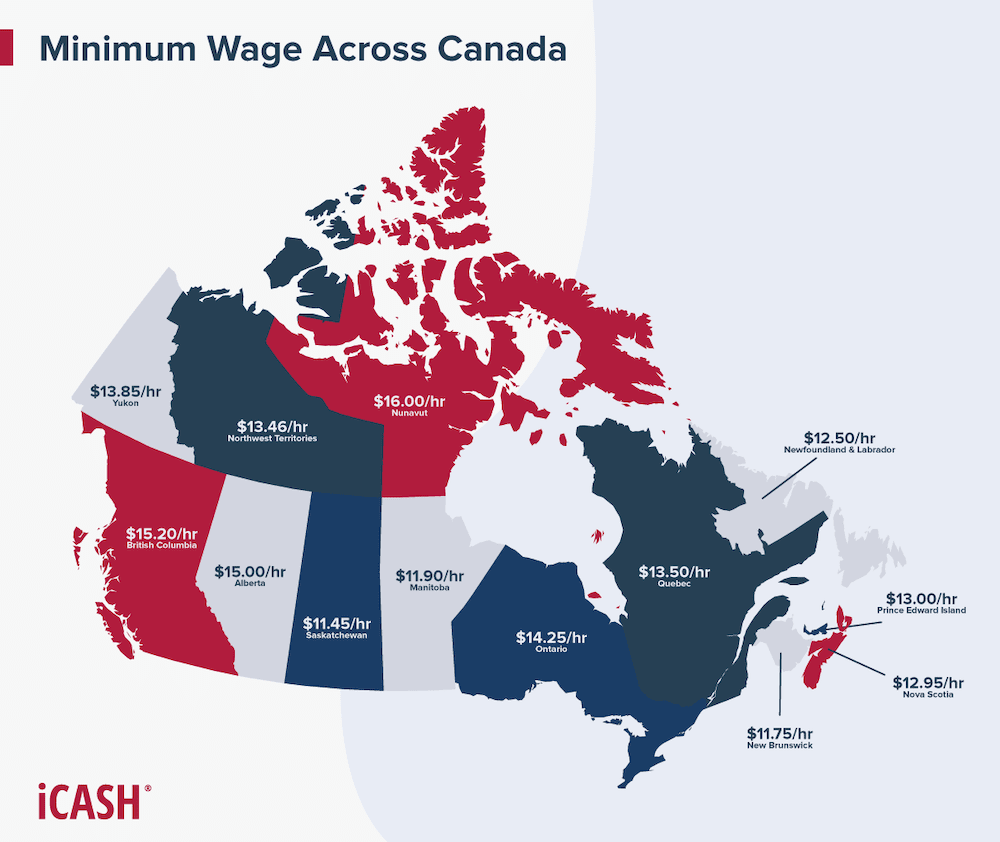 The pandemic saw many Canadians struggling to keep or find work and turning to alternative jobs for income just to keep up with bills. Knowing how much you could and should be paid at a job for minimum wage is important when applying to new positions, and it varies across each province and territory.

2020 taught Canadians many things, hand washing and social distancing among them, but the stand-out lesson throughout the pandemic was just how much of the country’s economy relies on minimum-wage workers. These employees are the backbone of Canada, and as many were furloughed or lost their jobs entirely, the search for new work has many questioning the national average for base salary across Canada.

The Canadian Labour Code sets a minimum pay standard that must be respected across the country, however, not in all businesses. The minimum hourly rate only applies to federally regulated industries and workplaces. For those in other industries, hourly and daily rates are at the discretion of the business owner, and not always as high as the federal standard.

Let’s explore base pay in Canada across all provinces and territories and find out what the government has in store for changes coming up at the end of 2021.

As evidenced by this list, base wage rates vary widely from one side of the country to the other.

At the moment, BC has one of the highest minimum hourly rates in the entire country along with Alberta, which makes sense as their cost of living are also two of the highest across the nation.

With a population over 4.4 million, the province of Alberta is one of the most densely populated in Canada. The province’s minimum salary was set at $10.20 per hour until the NDP took charge in 2015 and raised it to the $15 it is today by 2018.

There are exemptions to Alberta’s base salary. For example, students under the age of 18 working 28 hours per week or less, only need to be paid $13.00 hourly. And there are a few other rules as well in Alberta: a salesperson needs to earn no less than $598 weekly. Employees living with their employer’s must earn at least $2,848/month.

With an even higher population than Alberta, at more than 5.5 million, BC is the third most populous province in Canada. With major industries in aerospace, agriculture, forestry, mining, tourism and information technology to name a few; BC boasts the fourth largest economy in the country. So, it’s no wonder that BC holds one of the higher base incomes in the country.

Like Alberta, there are exemptions to the base salary rule. Live-in home support workers and live-in camp leaders are given minimum daily rates ($113.50 and $121.65 respectively).

Nunavut Has the Highest Base Salary in Canada

Although Nunavut has the largest land mass of any province or territory in Canada, it also has the lowest population, sitting just under 40,000 residents. Nunavut relies heavily on natural resources, fisheries and tourism as it main economic source.

While Nunavut holds the number one spot, offering $16/hr – that’s more than the federal minimum. They recently increased their base salary from $13 to $16 in April 2020 as a means to encourage their residents to remain employed, and to help Nunavut residents live more comfortably. Everyday items like milk, soda pop and bread cost much more in Nunavut, so the higher income hourly rates were implemented to ensure residents are able to afford all items.

Even though Ontario has one of the higher living wages, it’s not quite federal level at just $14.25. Although, it is important to note that Ontario’s base salary has risen from $10.25 in 2010. A $4 increase in over 10 years doesn’t seem like a lot given the cost of living in larger metropolis areas like Toronto or Kingston.

The high cost of living in Ontario could be one of the leading reasons why so many people in that province apply for quick short terms loans from lenders like iCASH. Sometimes their base salary just doesn’t cut it when their bills need to be paid or emergency expenses come up.

It’s no surprise that Canadians in provinces with lower living wages are turning to instant approval loans to meet monthly bill payments, despite the Canadian government recently announcing the federal minimum wage will be increased to $15.00 as of December 2021. However, this only applies to certain businesses and industries.

Minimum-wage workers are the glue that’s held Canada’s economy together for some time, and it took a pandemic to make us truly realize that. From food-industry workers to entertainers, caretakers, and store clerks/grocery store stockers; these are the employees who made sure Canadians were fed, clothed and cared for when the rest of us were asked to stay home.

It’s important to research the minimum pay rate in your province, especially if you are currently on the job market and searching. Remember to check the federally recognized industries to ensure you get the latest Canadian base salary rate.

There’s Always Help Out There

Sometimes base salary just doesn’t cut it – no matter where you live. Life can be expensive, and emergencies crop up. If it comes down to it, you can always turn to a trusted and licensed Canadian lender like iCASH for a quick cash advance to help you out when you need it most.

Step by Step Guide: How to Create a Personal Budget

HOW TO MAKE MORE MONEY AND PAY OFF YOUR DEBT

iCASH is a trusted, direct licensed lender that provides the fastest short-term loans in Canada by mobile app or online. With over 600,000 members, we are focused on helping Canadians on their path to better financial health.